Like I stated in my last post, "Ja-trini-merican" is a term that my brother coined for us.  I find it truly fitting!  I grew up watching my mother in the kitchen, and now I incorporate my mother's Jamaican roots and my father's Trinidadian roots in my preparation and cooking of food.  Using the following ingredients from Whole Foods Market, one is able to see the subtle differences in how they prepare their meals:  naan, tomatoes, coconut milk, cilantro, chicken legs and thighs, and an onion. 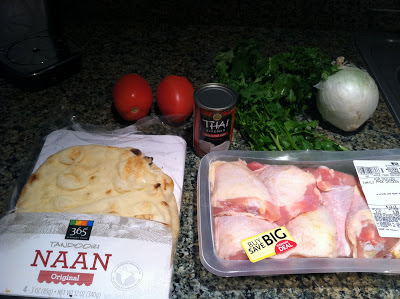 As usual, I like to season my chicken overnight as most Caribbean folk.  I removed the skin and seasoned my chicken with onion powder, garlic powder, thyme, a little salt and pepper, and some curry and turmeric powder (Jamaicans usually season their chicken with curry beforehand).  The curry powder from either country is already wonderfully blended; I used a curry and turmeric powder purchased from Whole Foods.  I also added a dollop of dijon mustard (my American way). 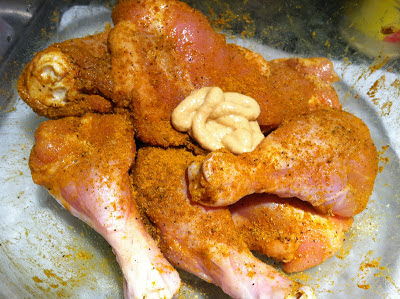 I put several cloves of garlic (I used about 7 cloves this time), roughly chopped onion, cilantro, and tomatoes in a food processor (Trinidadians blend their ingredients as well, but I like to use cilantro).  A cook from either country can use any vegetable they prefer, such as yellow peppers, chives, onions, etc.  On a side note, I really need a larger food processor lol! 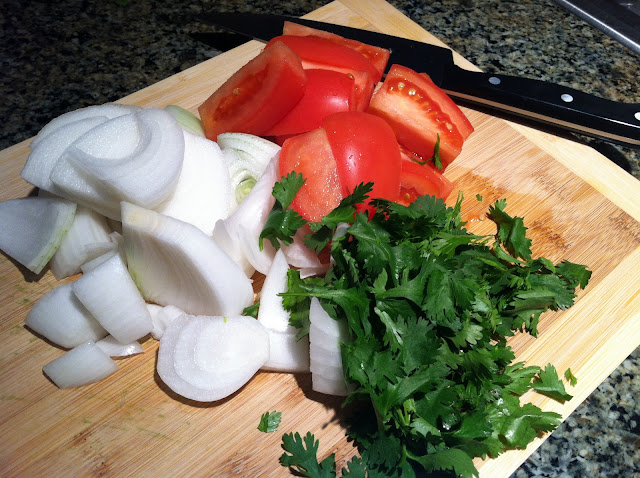 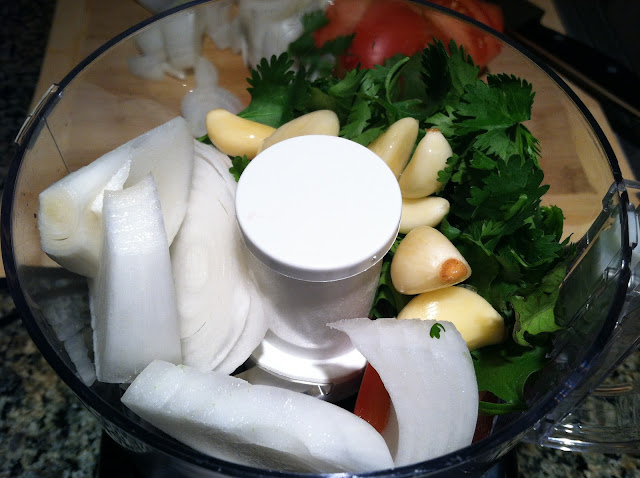 I normally perform the above step the day of cooking, but I wanted to save some time (Jamaicans roughly chop scallions or onions into their curry chicken the day of cooking as well). I placed the mixed ingredients on top of the chicken and combined everything in a large bowl... 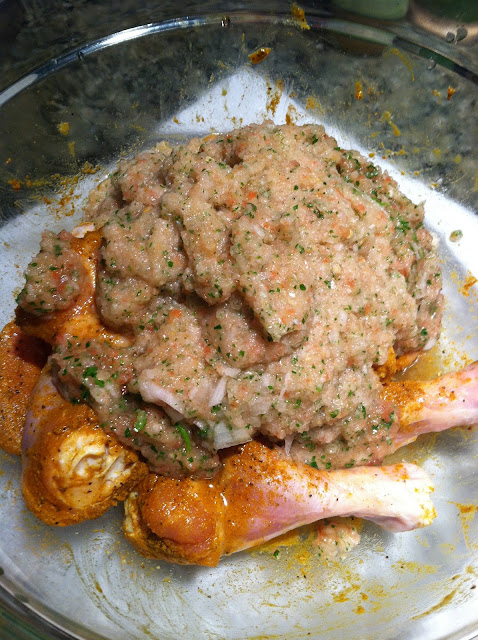 I placed plastic wrap on the top and off it went into the refrigerator for the next day...


The next day I added the following ingredients to my meal:  potatoes and chicken broth (most Trinidadians use chick peas/chana, while Jamaicans use potatoes)... 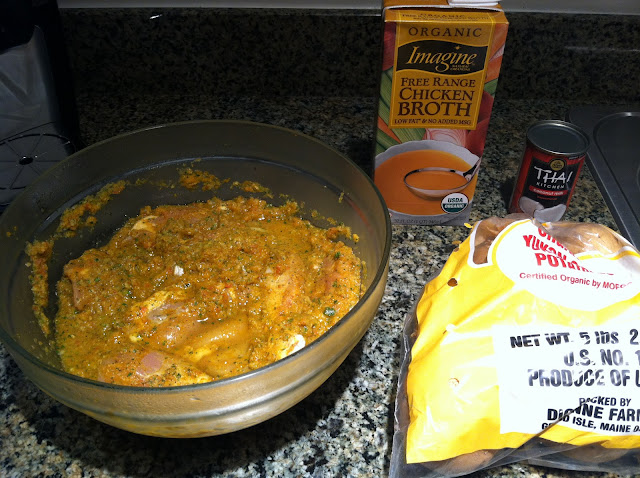 I love to add potatoes to my curry chicken, so I peeled and chopped them up... 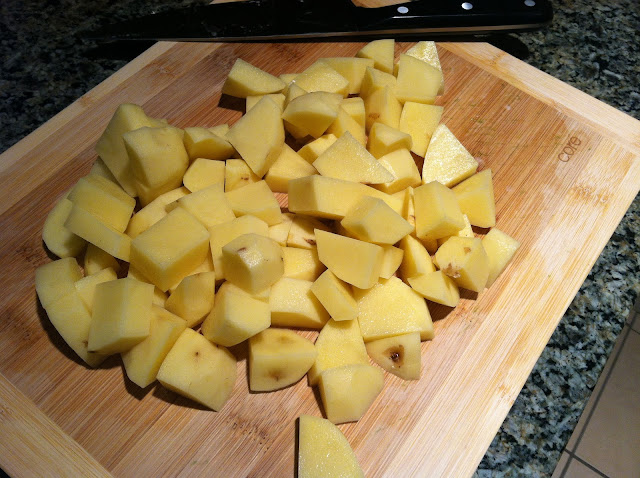 I set those potatoes aside, and started to mix a little water with some curry and turmeric powder in a small bowl (Trinidadians usually perform this step)... 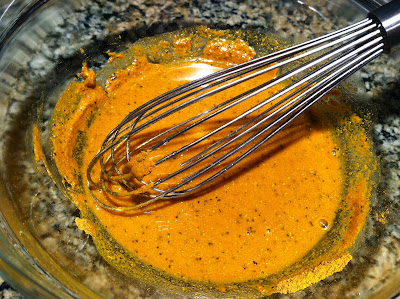 In a heavy saucepan, I added this mixture to a little vegetable oil in a medium-hot pan, mixing quickly with my wisk.  I added the chicken mixture to the pan, and I just let it cook down while adding a tad more curry powder (my American way).  I poured some coconut milk (my American way) to give it a creamy texture, and I usually add some chicken broth if the residual sauce becomes too thick (I didn't have to add any chicken broth this time around because the onion, tomatoes, and cilantro added enough moisture).  The chopped potatoes were added to the pot, as well as some "pepper sauce," (thanks Mom) for a little kick... 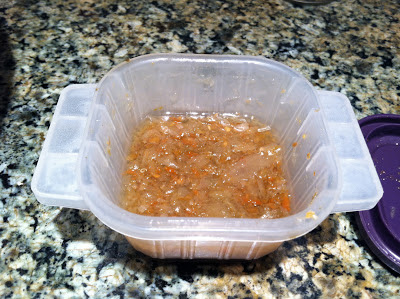 I added a tad more salt and pepper, and just covered the pot (time to let the "Caribbean magic" happen lol).  I placed the naan in the oven... 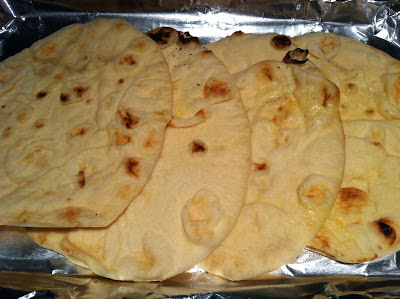 My whole studio apartment had a wonderful aroma... 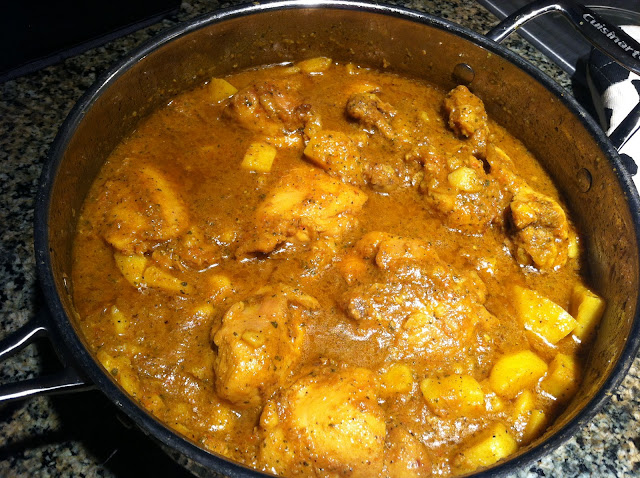 I roughly chopped some leftover cilantro (my American way)... 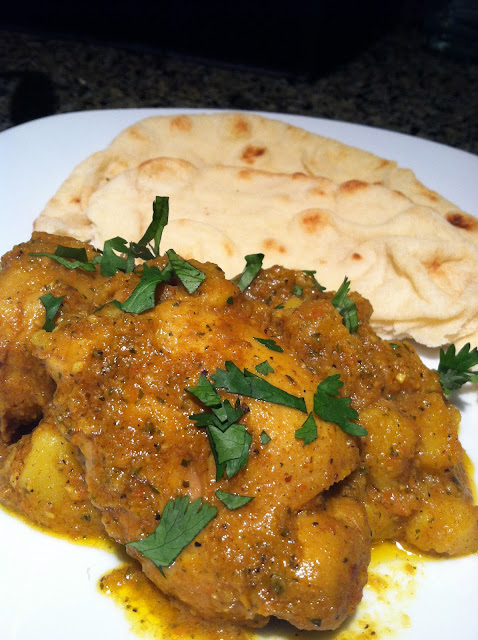 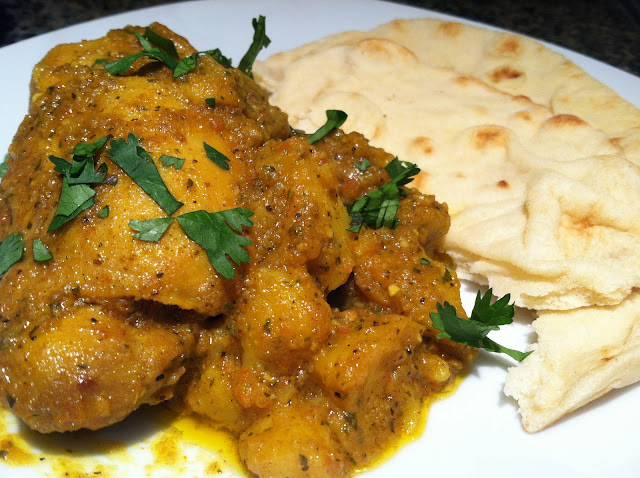 I cooked some rice in chicken broth the next day, and continued to enjoy my curry chicken.  You know the curry is good when it changes your nails yellow LOL! 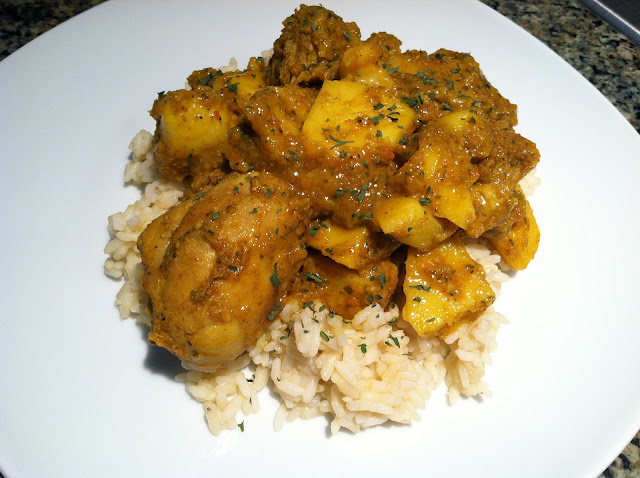 I like to blend every culture into my cooking while adding my own little twist.  Either way, I think Mom would be proud of this meal! 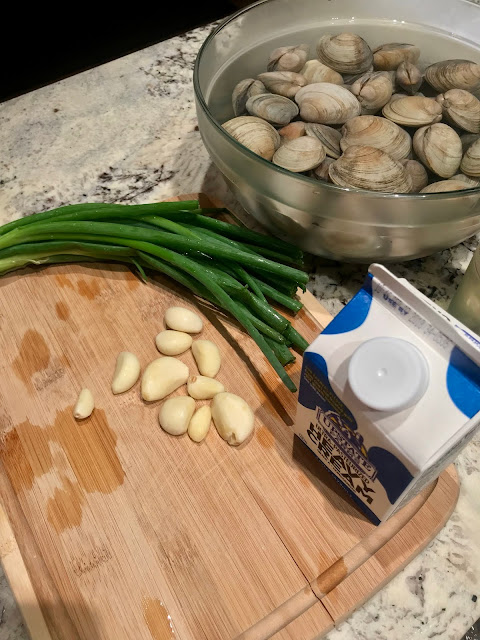 Clams in a Creamy White Wine and Butter Sauce 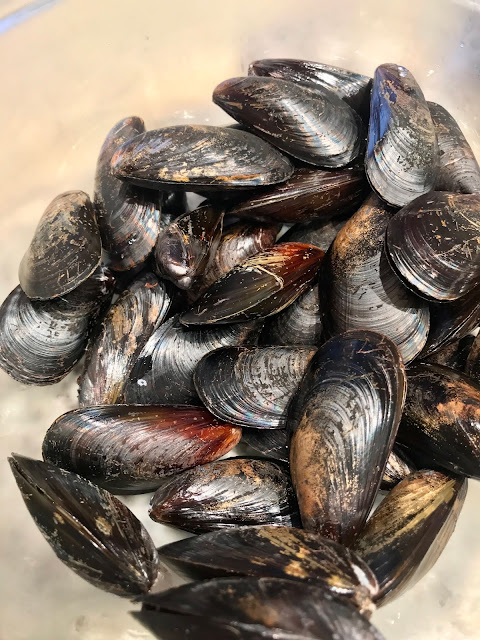